Russian Caravan tea is not actually tea from Russia. The tea is named for the overland route taken to transport Chinese tea to Europe in the 18th century. Back then, things traveled by camel caravans. The journey was thousands of miles long, desolate, and difficult.

The cold passage through Mongolia and Russia was believed to give the tea a distinct flavor that was different from tea that took a more southern passage from China to Europe. Some sources say the tea even took on a smoky flavor from all the campfires along the way.

Perhaps a real Russian caravan would look something like this... 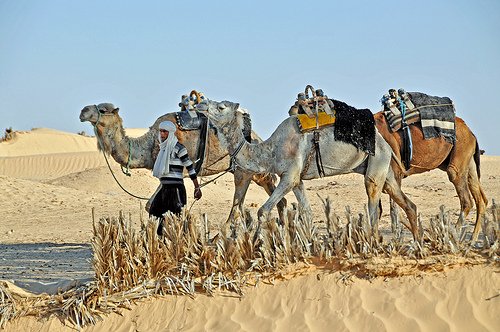 Tea with a Side of Campfire...Why Not?

Today the blend called Russian Caravan typically contains Lapsong Souchong, a tea that has a unique smoky aroma and flavor because it is dried over pine fires and therefore absorbs the smoky essence.

Other teas that may be part of the mix include Keemun, Assam, and Ceylon. The resulting brew is dark and rich with varying degrees of "smokiness," depending on the blend.

Russian Caravan has the characteristic smoky quality of Lapsong Souchong. Because it's blended with other teas, the smoky character is more toned down than it would be with straight Lapsang.

Are You Up For It?

If you like strong tea, want a blend that offers something different, and you're feeling adventurous, give Russian Caravan a try!

The smoky notes are more subtle than Lapsong Souchong because it is mixed with milder teas. The blend can be further subdued with the addition of milk and sugar. Russian Caravan usually has dark tea leaves and makes a dark-colored brew with hints of red.

Bottom Line: Russian Caravan tea is a distinct and daring tea blend. It has the signature smokiness of Lapsong Souchong that appeals to some and is off-putting to others.